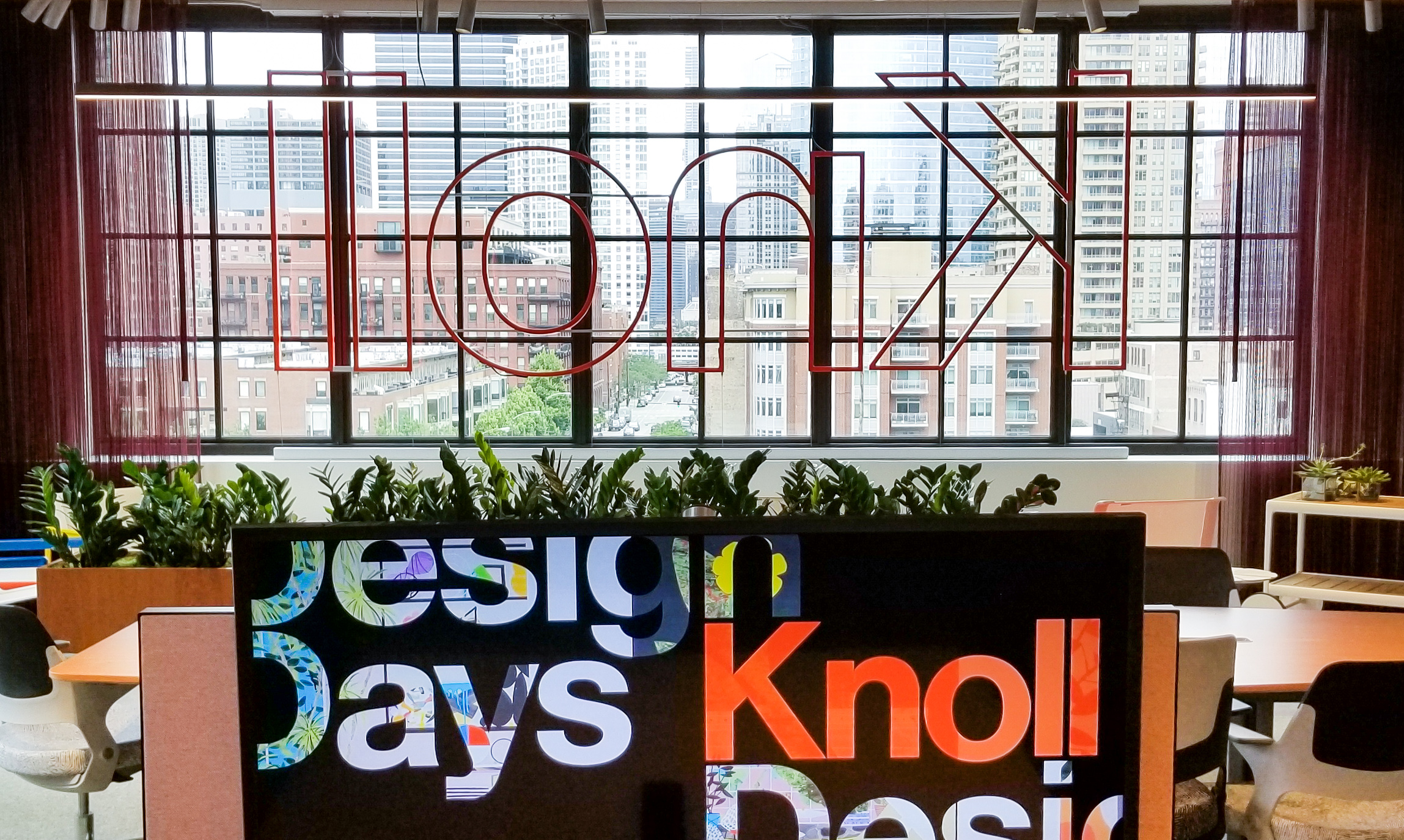 NeoCon is Broken – A recap of the show, new innovations and a solution

Here’s the NeoCon 2019 recap in one sentence…NeoCon is broken, here’s to the little guys, Knoll’s big gamble pays off, and innovation is always a smart bet. And here’s the five minute read for the full story…

Here’s to The Little Guys

Good times this year at NeoCon! It was a more relaxed trip for us this year. Maybe because we had completed all our furniture client obligations ahead of time, or maybe we’re just getting better at the tradeshow marketing game. Anyway, day one was busy as usual. We skipped the long elevator lines and got a quick cardio workout via the stairs. Straight up to 7. Yes, I said it correctly, 7. Not the usual heavy hitting floors of 3, 10, 11. We all know the big manufacturers, and all the other usual suspects. They all do great, amazing work. But we’ve also got much love for the little guys, the scrappy start-ups, and the passionate makers who want to craft, not just mass produce.

First stop, our friends at Loftwall, who flipped the script this NeoCon and decided to dedicate their space to small design firms who do great work. Together we crafted an elegant showroom gallery that would celebrate the work of these “small, but mighty” designers. It’s a fresh perspective that recognizes you don’t have to be a giant to be creative and tackle big projects.

We also visited Frasch/Stille who won Interior Design Magazine’s “Rising Star” award the HiP party. They’ve got loads of new product, design style that’s on-point and acoustic solutions for virtually any type of furniture you can imagine. Check them out when you’re ready to elevate your office furniture without breaking the bank. These guys have been around a few years, but Framery is still a relatively small player in the furniture manufacturing game. There are probably a dozen companies offering sound-dampening “phone booth” concepts, including all the big dogs. But most of these are surprisingly average – stuffy, lacking in options, and fundamentally unimpressive when it comes to sound dampening. Framery is proof that when you’re passionate about what you do and specialize in one thing, you can achieve remarkable results. Their noise-dampening booths are stylish, loaded with options and sound great. If great is like a monastery – silent.

After a full day of trucking around the Mart, it was time to get away – yes, not everything about NeoCon is at the Mart. We uber’d a few miles north to the new Turf showroom to see what their team was cooking up. In short, it was nothing less than spectacular. Turf seized an opportunity to restore an old, abandoned firehouse from around the turn of the century (yes that’s 1900) and re-imagine it as a showroom for acoustic baffles and tiles.

The team at Turf did it right – an open reception area with a bar/kitchen, followed by first floor open offices for the sales team. But the showcase piece is an original spiral staircase which leads to the second floor. It was given a fresh coat of fire engine red paint, shored up and good to go! What a fun statement. Up on the second floor is a beautiful, open multi-purpose space with another kitchen and fireplace. This is the perfect place for Turf to entertain clients during NeoCon, or anytime.

As you would expect, Turf carefully designed every wall, ceiling and piece of furniture in the firehouse to showcase their broad range of acoustic baffles and tiles. Wall art has been cleverly created using their tiles, placed onto canvas boards. What a cool combo – design an acoustic tile wall, or, just buy a pre-designed artboard carefully curated by the design team at Turf. The options Turf offers with acoustic panels, from ceiling baffles, to private rooms, and wall art, are simply amazing. Everyone in the furniture industry knows that Knoll took the leap and moved out of the Mart, but here’s the quick backstory for those outside the industry. Knoll is one of the biggest furniture manufacturers in North America and they have held a permanent showroom at the Mart for decades. Along with many other leading furniture companies, this is “just what you do”. Why? Because the Mart and NeoCon are Mecca when it comes to showcasing commercial furniture in the USA.

But last year, Knoll made a bet that NeoCon is in decline. The theory is the Mart is a dysfunctional building, and that maybe just maybe, there’s a better way to showcase new products and inspire designers than through a traditional showroom at NeoCon. Knoll ended their lease, packed up, and moved to cool new digs a few blocks away in a thriving warehouse district that’s making a comeback.

Great idea in theory. But what if you can’t draw visitors offsite to your new space? What if the crowds forget about you and just stay on the beaten paths of floors 3, 7,10 and 11 at the Mart? It’s an interesting play that could be applied to other industries and tradeshows – move out, but stay close, control your destiny, and invest in your own showroom. Instead of paying outrageous tradeshow floor rates, pull traffic from the show, and position your brand as an innovator.

We had to find out if it worked so we took a quick ride over to the new Knoll showroom. In short, smashing success! Their space was beautiful, complete with sweeping views of the Chicago skyline. The product was great as always (they’re Knoll so that’s what they do), and the space was full of NeoCon attendees taking a break from the crowded halls of the Mart. To top it off, this was a Wednesday which is usually a light traffic day. Not for Knoll – their showroom was hot! As the saying goes, “lead, follow, or get out of the way”. At least Herman Miller has decided to follow – Knoll out of the Mart that is. During NeoCon Herman Miller announced that this would be their last show at the Mart. Next year they will relocate a few blocks from Knoll. As one of the biggest exhibitors, this signals a major crack in the foundation of NeoCon. HM’s showroom looked stale, lightly trafficked and overall lacking. It seems the management team at HM decided to throw in the towel this year and focus on next year. Hopefully their big move will be a shot in the arm for one of the industry’s largest manufacturers.

This is cool stuff. Sandow Media, parent company of Interior Design Magazine, launched a centralized ordering/distribution system for manufacturer samples about a year ago. Fundamentally there’s nothing innovative about this. It’s not a new idea to centralize ordering management, nor is sampling. Sandow and Interior Design have been successful with this platform because they are an influencer and market-maker. Kudos to their team for remaining relevant and a leader, while most other magazines have declined in the digital era. Anyway, the real innovation by Material Bank is their new RFID-driven, touchscreen collaboration board.

Using their proprietary system, designers can scan samples from the library and then mix, match and visualize on a large digital display, which also triggers the sample order to the client. While in route, digital mood boards can be shared immediately. That’s not even their biggest innovation. They are also launching a light-box that allows you to interact with hologram-like images of products, apply new colors and textures, and even get unique perspectives with eye-tracking technology. Gotta see this to truly understand it. Good news for everyone who loves the 80’s – they’re back! From the 80’s pastels to touches of brass and gold colors, it’s clear that the era of parachute pants and boom boxes is again influencing furniture design. All things are cyclical. Smart and wireless charging seems to finally be getting it right. Sure, this technology has been around for a while, but now it’s more seamless, convenient and in the right places that users naturally expect. Look for this trend to continue to expand over the next five years.

NeoCon is a blast, and NeoCon is relevant. But NeoCon is broken. I think we’ve all known this for a few years, and just didn’t want to admit it. The Mart is a beautiful and nostalgic architectural icon, but it’s not a show friendly facility. For an industry focused on designing functional spaces, we’re really stuck in the mud with the Mart. This show is a fantastic way to connect with industry peers and cram a ton of information and inspiration in three days, but it’s time to think outside the box. Knoll and Turf have proven there’s a different way, by “doing their thing” offsite. Clerkenwell in London is a direction that makes sense for NeoCon to consider. They take a “design district” approach, rather than one single building. There’s a bright future for NeoCon – we just need to accept that it shouldn’t be limited to the Mart, and start innovating.